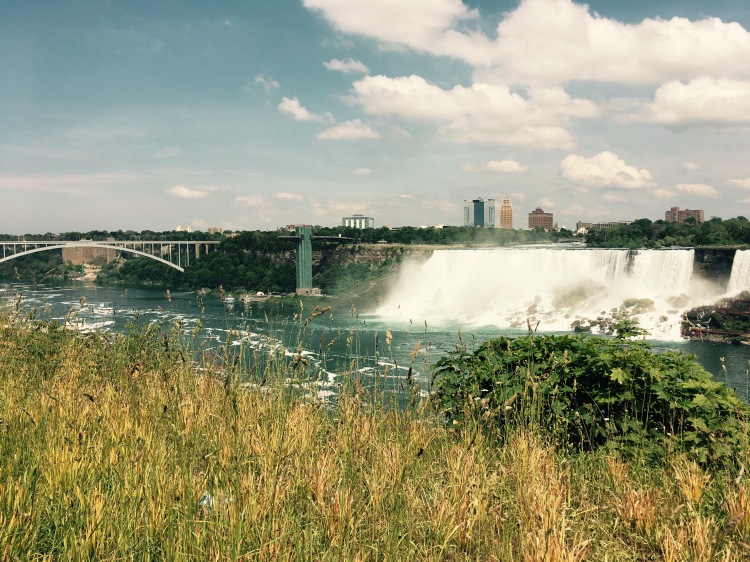 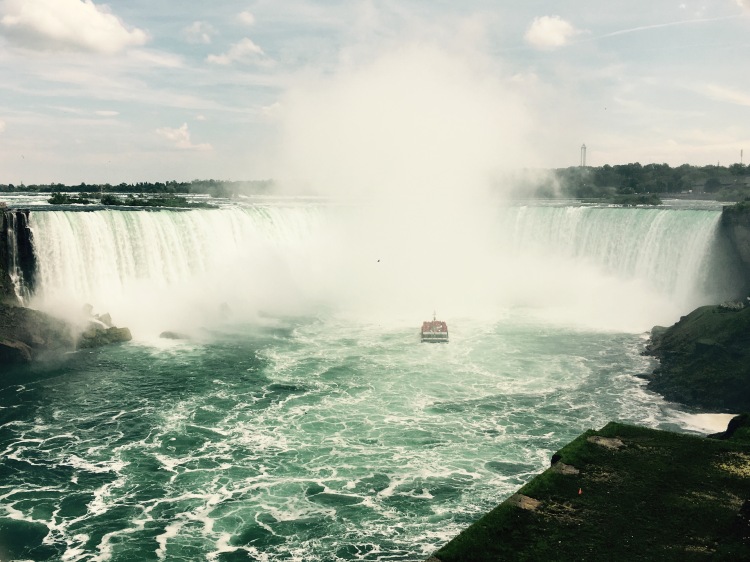 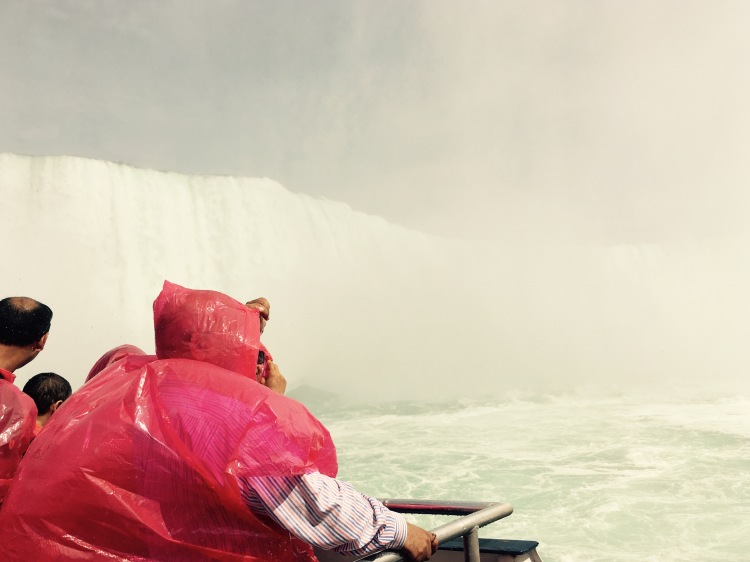 Memories of fog and rainy wetness from about two decades ago, with my grandmother aboard the Maid of the Mist on the other side of Niagara. I remember I couldn’t see through the downpour on my glasses and shivered under my poncho. We stand now on the Canadian side, blue yawning below and above us, the hum of water as it eternally pours into the giant basin which catches the plunge, as it did twenty years ago.

Long after the last cruise on the Hornblower noses its way into the white and foaming spray, after the Clifton Hill ferris wheel powers down its lights and the drab haunted houses and wax museums, arcade alleys, casinos, and Chinese restaurants with washed-out lettering close their doors for the night — after that and many years the falls will continue their downward drag, their restless wake, and even in the cloudless dark, without anyone marveling, will soar into familiar and treacherous depths. 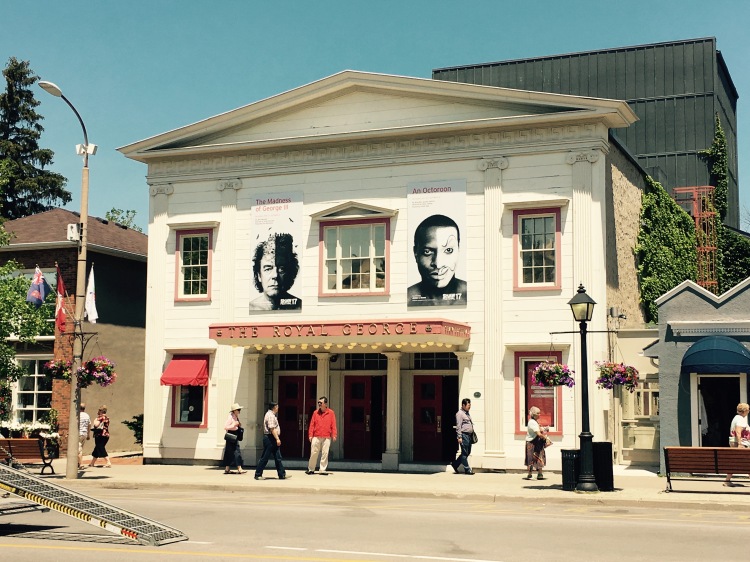 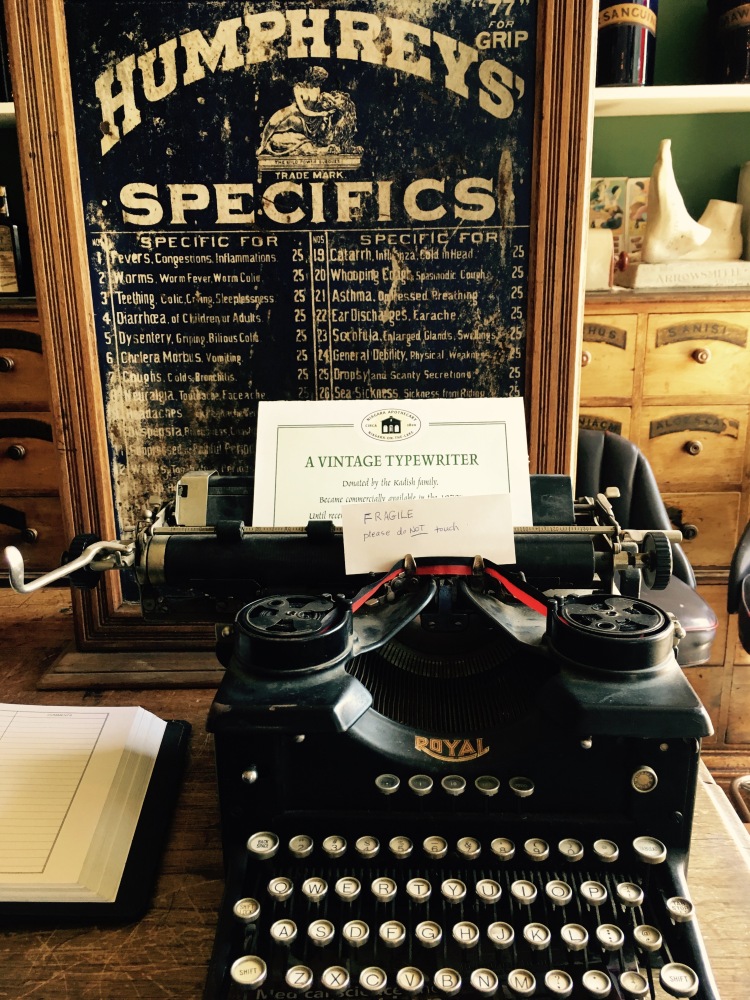 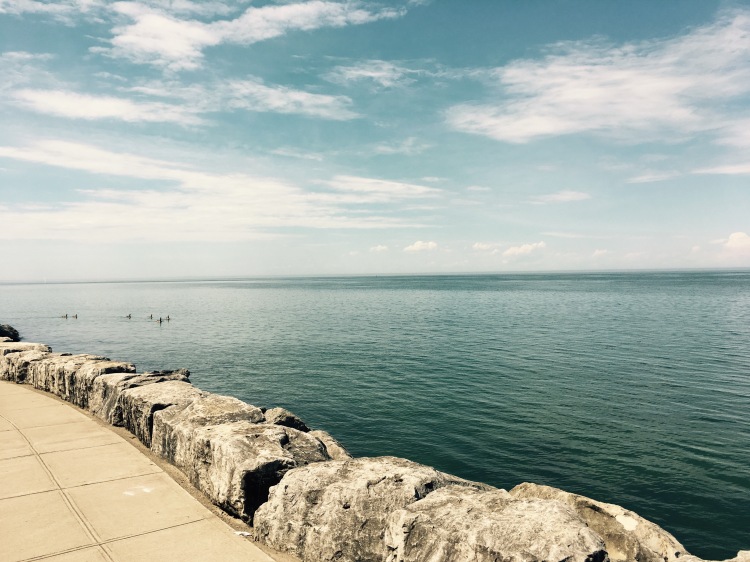 Niagara-on-the-Lake is a town of strawberry summers, brunchy Sundays, yellow skirts, melodies sung by a theater troupe. Out on the lake look-out, geese glide from one end of vastness to another. The peaceful trees throw shade over our city consciousness, and the vineyards float under the long, thin horizon bearing up gracefully its last daylight hours. We overlook the spindly, straight green rows which spend their seasons growing.

In the wintertime, intrepid pickers dig into a thick layer of snow to pluck the frozen, shriveled grapes out of their unforgotten misery, to be made into ice wine — tart, saturated, deserving of slow savoring. In the town, shop windows draw the eye toward all of the usual trinkets of fare and food characteristic of a familiarly far off place.

An old building which was once an apothecary lures our curious eyes into its airy and high-ceilinged space, now a small museum. Old-timey glass jars formerly used for 19th century cures for ailments line the shelves towards the ceiling. An ancient black typewriter sits on the counter, contemplating its life of word-smithing — oh how the times have changed! A white porcelain jar declares itself a container of LEECHES. Pamphlets on bloodletting, pills, new medicines. Artifacts and old words alive on preserved pages — we find ourselves fascinated by such moments of the past in the present.

All cities strive for the same great heights. Unity in diversity. Plentifulness in population, and parking. A distinguished and echoing skyline that can be silhouetted against a t-shirt. Boom of businesses, attraction of many things happening at once, pace of locals and tourists striding side by side across a tree-lined avenue, towards the nearest florist or cake shop or hair salon.

Toronto accomplishes great things in the line-up of world cities. Its sheer size, felt in the 20,000 wandering footsteps we took across the downtown area and around and back, seems to rival that of New York City, but in its better-smelling sidewalks and intersections, there is more space to stroll, stop, look above and beside. Cleaner air, more freedom, more opportunity to pause and peer down graffiti-art-laden alleyways.

Everywhere there is something happening. Alongside the plethora of curious shops in Kensington Market and its T-shaped cross streets, musicians with banjos caterwaul for coins. Army surplus stores offer discounts on old war bags, gas masks, coats. Dogs meet other dogs while their owners sip on tea and sample boiled bagels characteristic of the region.

Cafes, taco shops, jerk chicken, empanadas. The cultural divides are broken down, demolished in an earnest stroll across the block. Perhaps that sounds a bit idealistic, but there is something to be said for a place where so many different kinds of food become the norm. Where you fit in. Where ethnicity carves out a space for itself and thrives in celebration.

The food, by the way, is splendid — best tacos I’ve had in a while! (I am always reluctant to say “ever” — does one remember delectable tastes well? Where are these senses stored?) Under the June sunlight, the afternoon feels perfect as we hop from shop to shop and appease our appetites for pretty things and tasty morsels.

IV.  City of so many colors. Multitudes of public space, parks, harbor front, places where one can commune with the city. Shows, concert rehearsals, festivals, shopping malls. St. Lawrence Market is a hotbed of attractive products under colorful signs, lying enticingly behind displays — we try their famous “peameal bacon” on a soft roll, which tastes oddly like spam. We venture into a Japanese snack bar featuring maids as waitresses, who interact strangely with their customers. We stand in line for a free t-shirt championing women in sports. We even make friends with a charming iguana named Iggy. All in a day’s work! 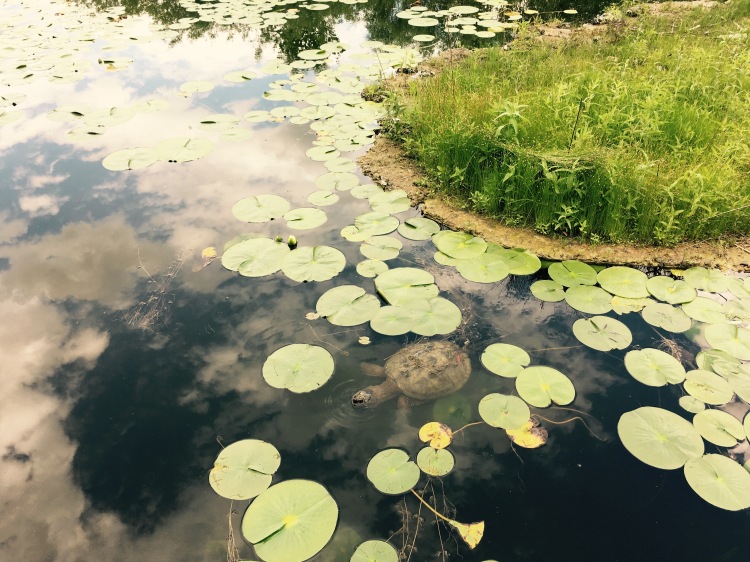 V.  Sprawl of public and repurposed spaces breathe life into different ventricles of the city — the life blood is its people. A farm with cows, sheep, chicken, and wooded trails for walking. A historic brick mill factory that had fallen into disuse, revived into a communal space for garden markets, classes, community events, landscaping, and a marshland for native plants and animals.

To stand in places like these is to use one’s imagination as a time capsule, superimpose the tools, machinery, and structures of the past onto where one is stepping, attempt to draw together the parallel worlds which the fourth dimension has divided while no one was looking.

At the distillery, too, the brickwork shines under the afternoon angle of sun. The manufacturing of so much whisky through these walls — grains, malt, beer, distillation, fermentation, storage. Everything a somber workman’s brown. Chutes and ducts, machines with gears and pulleys, creatures alive and spitting during the height of the industrial age.

Walking is a wonder in this city, where there is no hurry for the past to catch up doggedly alongside the present. One can sit and have a beer in the heart of all this history, and the lukewarm June wind will blow between buildings to remind you of the here and now, how far we’ve come. 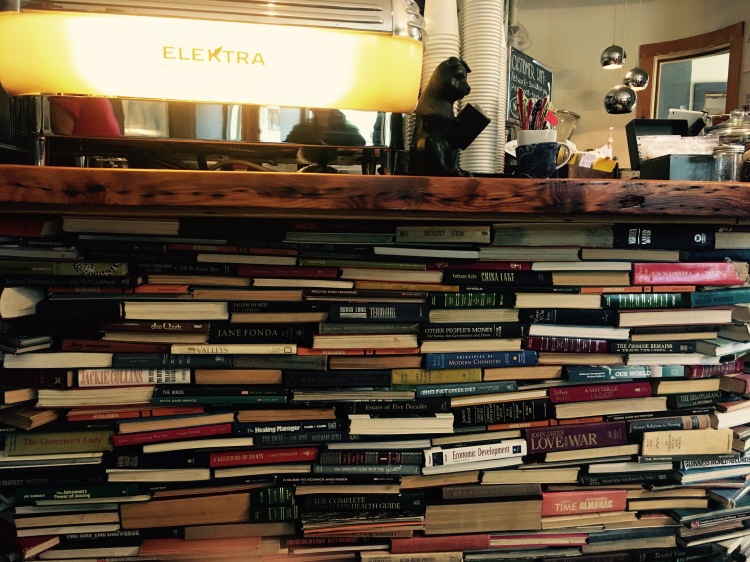 The small wonders of small towns. Coffeeshops and restaurants are decorated in the most interesting ways, providing a very specific and unique sense of place. The European aesthetic and its particularity for the perfect accents. In Gananoque, the boats pile up beside stretches of piers and docks. A small beach spends its lovely days across from an embankment of mother geese and their geeslings. Its waters are a pure, dark blue, like stormy eyes. It is hard to imagine life here in the wintertime, an isolated port town with suburban houses and pretty scenery of the river.

When I am away it is hard not to feel the tug of home sometimes, although it gets easier to find those still places in your mind, to take a rest and marvel at the exact spot you are in now. To be thankful for everything you have seen and have been given. For the sunshine and the cloud formations, good food and comfortable beds. For the whole promise of traveling — being far away from home and seeking out those things which bring joy to people in other places — sunsets, parks, waterfalls, streets lined with beauty, art aspiring to brave heights.