1. The trolleys rumble through the curving streets of downtown, the automated woman’s voice announcing the next stop makes sounds that are unrecognizable. Turkish is one of those languages whose sounds I can’t even recall, whose rhythm and texture are undefinable. I manage to learn two phrases: Tesekkur ederum, thank you, and peynirli gozleme, cheese pancake.

2. From mosque to mosque, the colors are inviting, the ceilings majestic and hung with large circles of low, tapered lights. Barefoot, I wrap a shawl around my head and step slowly through the doorways, pad with my feet on their long tradition of carpets beautiful enough for kings. 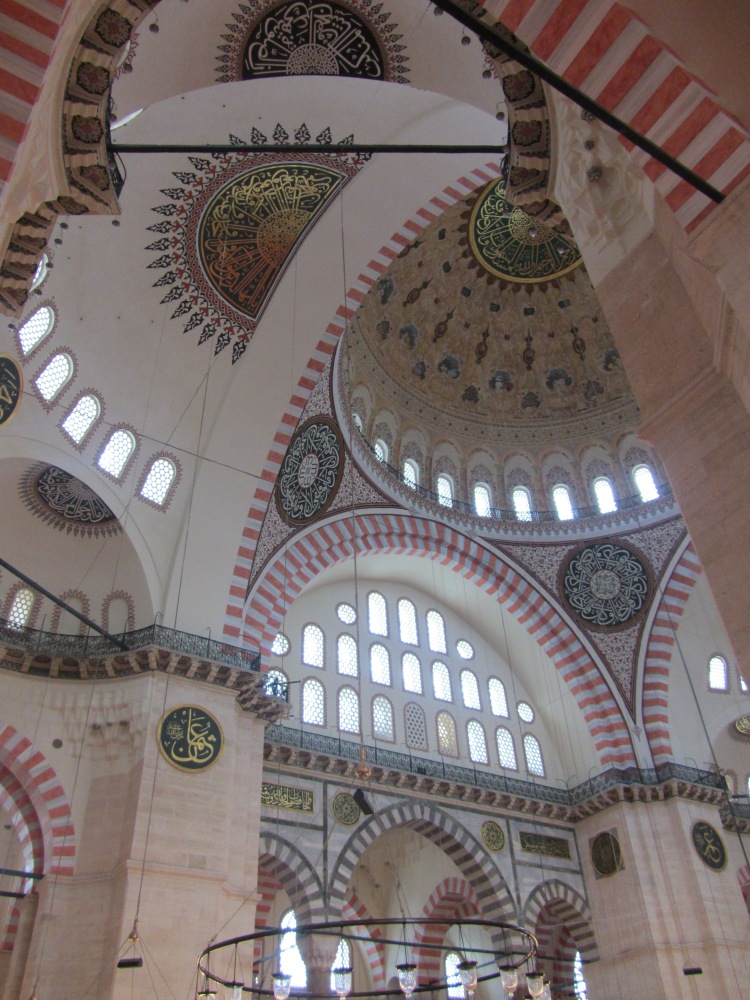 3. “Handmade” is a word that is thrown around by all the street salesmen in the markets and bazaars, even with merchandise that can’t possibly be handmade. They know it is a word that entices foreigners and that may get them to pay higher prices, inevitably bargaining them down to something that’s still much higher than the market price.  Silk pashminas, saffron, Turkish candies, tea, false designer handbags, soap, ceramics, vases, and always the carpets… The Grand Bazaar is an endless maze in a building that was once a medieval marketplace. The Spice Market offers a more authentic alternative to the westernized merchandise, with its open-air stands and products that the Turkish actually buy.

4. The bridge leading to the occidental side of the city is crowded with fisherman leaning over either side with their lines, their buckets of water and catches of the day. Cars and trolleys run in the middle of the bridge, and underneath, the entire length is filled with restaurants that grill fish and waiters that constantly invite passersby with “Yes, please, why not? Just take a seat here…”

5. A cruise on the Bosphorus strait reveals Istanbul as an endless city, a real city, with its sloping hills, majestic palaces and wooden houses that flank the river line. The skies change from rain-gray to sun that makes the water glimmer. The strait is so narrow on the map and so vast in real life, full of ferry traffic and merchant ships cruising between the Black Sea and the Sea of Marmara.

6. Turkish food is pretty delicious. We order a kebab dish at this place near our hotel with views of the sea, where the locals hang out and while the afternoon away with tea and games of backgammon. Hookah, Turkish tea, and sea view are relaxing combinations. The Turkish pizza that they sell in the street in the spice markets are very tasty, reminding me somewhat of scallion pancakes. By the river street carts grill freshly-caught fish and sell sandwiches for a euro. And everywhere they squeeze fresh fruit juice, oranges, apples, pineapples, pomegranate. Other delicious things: Turkish yogurt salad, Turkish delights (sweets with nut fillings), pancakes, potato salad. 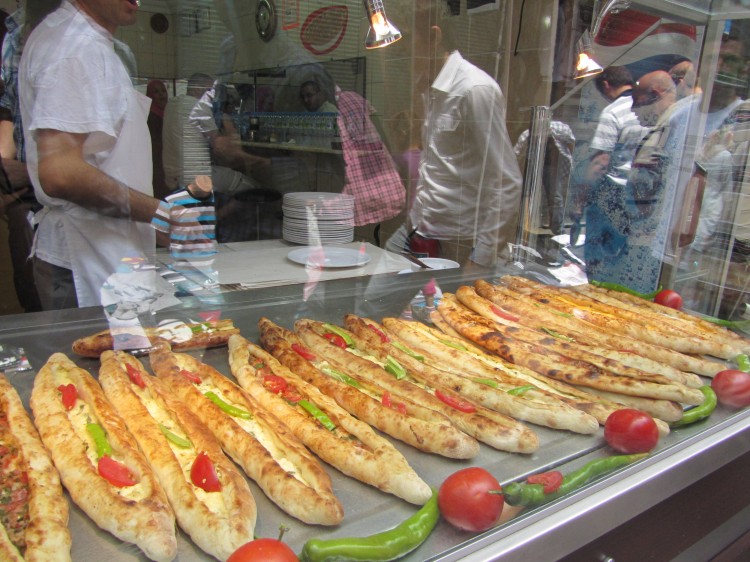 7. We visited the Topkapi Palace, home of the sultans of the Ottoman Empire. Huge, formidable, with pretty gardens, like all palaces, but the most impressive part is the Harem, where a court of beautiful and intelligent women lived as the sultan’s lovers, advisors, and possible future queens. Endless marble floors and columns, minutely crafted stained-glass windows, the sultan’s domed chamber.  These places are always so hard to imagine in their historic setting, in the time when they weren’t a museum invaded by tourists from everywhere, when they had a use as well as beauty.

8. One of the most pleasant walks of my life: all along the riverside from the bridgepoint back to our hotel in the southern end of the city. Locals enjoy their Sunday with their families, fishing, grilling food, sitting in lawn chairs drinking tea and smoking. The Bosphorus stretches out to the other side of the city, open and inviting, the pride of Istanbul. The silhouettes of young men are seen lined up on piers, who stand with their lines and buckets, waiting for a catch. We buy slices of watermelon and sit on a bench to take in everything.

9. The Hagia Sophia was once the cathedral of Constantinople, later converted into a mosque. Its looming structure stands in the heart of Istanbul, surrounded by parks and fountains. Within, faded Byzantine icons share façades with Islamic inscriptions. The ceilings and walls are decorated with tiles and mosaics, the floors and columns made of marble.  The Christians and Muslims prayed, centuries apart, to different gods, at the same altar.

10. We cross the bridge to the occidental side of the city, saying “We’ve reached Asia.” Its streets are much hillier, and the main feature is the Galata Tower built in 1348 for fortification purposes. We go up the tower in the elevator and are met with a panoramic view of Istanbul that gives slight vertigo. From there we can point out the Blue Mosque, the Hagia Sophia, and the Galata Bridge which led us to this side.

One thought on “Turkey, I”