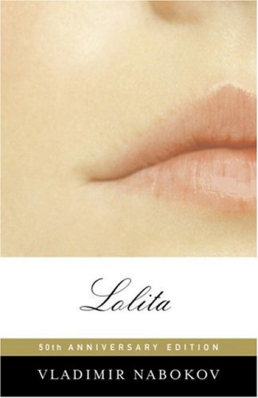 I moved on to Nabokov’s Lolita after having read and enjoyed his somewhat obscure yet ultimately pleasing Pale Fire. The latter novel’s ability to be tied up, plot-wise, into a neat package of intrigue and endless interpretation seems to counter what, for me, drives the superb-ness of Lolita: not the story that plunges the reader headlong into Humbert’s maniacal downward spiral but certain, banal moments in the book that are lifted from their ordinary-ness into the tender magnifying glass of Nabokov’s genius language.

Nabokov himself, in his afterword, states that the images that he “picks out for special delectation… are the nerves of the novel. These are the secret points, the subliminal co-ordinates by means of which the book is plotted” (316). This was certainly true for me — passages in which the looming haze of the American desert is so gorgeously reproduced, or the familiarity with which Humbert describes Lolita’s stance on the porch, or the way Humbert secretly muses over Lolita’s class list, among which her name creates in him a feeling which we all have felt and recognize as love, infatuation. Such points in the book, Nabokov says, would be glossed over by a reader who is under the impression that lewdness or pornography is its primary purpose.

I think the weaving of those “subliminal co-ordinates” is what I love most about Nabokov’s writing. He writes a kind of prose that approaches — I don’t want to say poetry, because that would be inaccurate — a kind of reality, a detailed, bright, underside of reality that is not like the vague and lackluster realities of other writers of novels. There is something so astoundingly accurate in his prose, as if any other combination of sentences or phrases could not possibly do the image justice.

It was interesting to go back and read the fictional introduction by “John Ray, Jr.” after having finished Nabokov’s afterword. The foreword is a fictional comment on Lolita as being akin to a cautionary tale with an “ethical lesson,” and, like Nabokov himself mentions, the reader is wary that the afterword consists likewise of “an impersonation of Vladimir Nabokov talking about his own book.” However, the afterword was written a year after the publication of the novel and contains some important notes on the reception of the novel and how the author himself meant for the public to read it.

Nabokov claims that the purpose of good fiction is not to teach a moral but rather to simply afford the reader “aesthetic bliss.” John Ray, on the other hand, introduces the novel with the insistence that Lolita has a moral reading, and that is to “apply ourselves with still greater vigilance and vision to the task of bringing up a better generation in a safer world” (6). This commentary is meant to be humorous and ironic, of course, and I’m guessing Nabokov had to set a few things straight after many critics claimed that the novel does not teach anything meaningful and is full of base, unredeemable characters.

Yes, some parts are quite shocking and pretty gross (especially keeping in mind this was published in 1955) but even more shocking is writing like this:

A breeze from wonderland had begun to affect my thoughts, and now they seemed couched in italics, as if the surface reflecting them were wrinkled by the phantasm of that breeze. Time and again my consciousness folded the wrong way, my shuffling body entered the sphere of sleep, shuffled out again, and once or twice I caught myself drifting into a melancholy snore. Mists of tenderness enfolded mountains of longing. Now and then it seemed to me that the enchanted prey was about to meet halfway the enchanted hunter, that her haunch was working its way toward me under the soft sand of a remote and fabulous beach; and then her dimpled dimness would stir, and I would know she was farther away from me than ever. (131)

Seriously titillating, this writing! It is the epitome of aesthetic bliss. We are with Humbert all the way, witness to his vileness and longing and heartbreak. We are so intimately in his head that we can only love Lolita too, and pity Humbert for his psychotic affliction. Wrong and revolting as it is, isn’t it love after all? We are indeed made to believe so, near the very end:

No matter, even if those eyes of hers would fade to myopic fish, and her nipples swell and crack, and her lovely young velvety delicate delta be tainted and torn — even then I would go mad with tenderness at the mere sight of your dear wan face, at the mere sound of your raucous young voice, my Lolita. (278)