I have recently rekindled my relationship with the Free Library of Philadelphia branch on Vine Street, a place I frequented as a young reader. Walking up the granite steps and pushing open the doors of this giant and grandiose building reignites deep and fond memories, of Saturdays spent browsing adventure books peopled by young female heroes and talking animals. On my latest library runs as an adult, I have been determined to borrow more books of poetry, particularly collections written by Asian American writers. 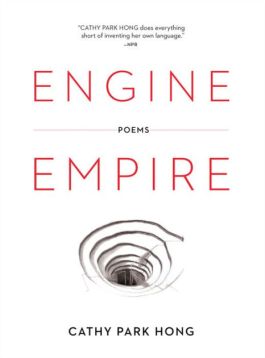 Engine / Empire, a collection of poems by Korean American poet Cathy Park Hong, published in 2013, was one of the first books I delved into on my poetry reading mission. A collection divided into three sections, this book takes on a melange of voices which vary by generation, historical significance, and cultural viewpoint. Hong’s writing is razor-sharp and brilliant, evoking my sense of wonderment at lyrical lines which bring together electrifying, spot-on combinations of words that at times gave me the shivers. I envisioned Hong yielding her glinting reinvention of language in a fencing match against the evils of sloppy and vague untruths. I enjoyed the presence of experimentation and gravity in her poems, the way they express the yearnings of humans in three seemingly unrelated cross-sections of life, and how the power of “empire” can be derived from all three parts in relation to the crushing effects of modernism, capitalism, and the resulting state of disconnectedness.

The first sequence, titled “Ballad of Our Jim,” draws inspiration from the Old West of the 1800s and follows the adventures and tragedies of boomtown fortune-seekers in California. In this collection of ballads which feature a young, wandering, and fierce character named Jim, the writing takes on the watery colloquial language of cowboy westerns. Ballads which playfully adopt certain letters, such as the following in “O,” constrain themselves to vowels and consonants in their mission to reveal the forlornness and rough-and-tumble lifestyle found here:

The second sequence, titled “Shangdu, My Artful Boomtown!”, is set in a fictionalized modern city drawing inspiration from present-day Shenzhen, China. The rising skyscrapers, condo blocks, and parking lots of Shangdu contrast sharply with the peasant farmer lifestyle of rural areas, whose young residents have abandoned for life and work in the developing big city. The break-neck speed of industrialization and modernization in opposition to the toil of traditional agrarian life is felt in heart-breaking lines like the following:

“I tilled and tilled our narrow plot from daybreak to cinder dusk.
When you write about the 400 string lights,
you and your wife hurting w’ laughter
on a duck-shaped boat

do you know your laughter carries itself to our lornsome hills
and flushes my ears when I feed
Ma her broth?”

The last section of the collection, titled “The World Cloud,” is set in the distant future and imagines a life broken away from the physical body and experienced as accessible data on the cloud. Human consciousness floats fragmented in a space inhabited by memories and books. This anchor-less expansiveness lends a haunting quality to the end of the collection, and the notion of empire as constant and ubiquitous connection (not so far from our present reality) creates an isolating vision of the future.

Cathy Park Hong is one of my favorite writers at the moment, and she is a complete tour-de-force, both as a poet and essayist. I was very disappointed that her talk on her book, Minor Feelings, was canceled this week in Philadelphia, but hopeful that I will get a chance to see her speak at some time in the future.